Home > Blog > DIY Family Halloween Costumes The family that trick-or-treats together... is awesome!

DIY Family Halloween Costumes The family that trick-or-treats together... is awesome! It took me many years to convince my husband to participate in a couple’s Halloween costume.

Of course he was only my boyfriend at the time, and he resisted the idea wholeheartedly. Was it his fear of commitment or simply his inclination to be difficult in sentimental situations? It remains a mystery, but after not-so-subtle pressure from me he finally relented, and to this day I consider it a major milestone in our budding relationship.

Halloween has always been a favorite holiday of mine, and it is steeped in nostalgic memories of chilly Georgia evenings trick-or-treating with my siblings and parents. Like any good working-class eighties families, we were not allowed to purchase store-bought costumes. We made them, and since my mother wasn’t a seamstress by any means, making them really meant “piecing them together” from items we already owned. And yes, with enough begging, we were allowed an occasional purchase, but generally we enjoyed brainstorming and creating our Halloween costumes. Of course this creativity gave birth to costumes such as my Pretty woman inspired “working girl” when I was ten-years-old and my brothers being a bloody (insert any noun here) almost every year. Hulk and Sheera, before children, obviously. Look at how young and carefree we are. The beginning of a great tradition.

As an adult, my passion and creative approach to Halloween intensified, hence my enthusiasm for the couple’s costume (see above!). Needless to say, when I became a mother the idea of dressing my sweet little daughter up was almost too much to bear. At just three months old she celebrated her first Halloween, and a family tradition was born — the Bohrer family Halloween costume. As our family has evolved, so has the tradition. I like to think that we just get better every year, but I also know that we are up against the clock. That adorable three month old is now a willful four-year-old who is being bribed ferociously by her parents to not dress up like a princess, and this year she will be joined in the family celebration by her toddler and newborn brothers.

So here are the Bohrer Family tips for creating a family costume that will have your neighbors talking!

Start with the child(ren). I craved watermelon every single day of my pregnancy, so when I saw this costume at the store (yes, store bought) I had to have it.

Because seriously, they are the cutest and most important part of the ensemble. When you have one child, this is pretty easy.

When more children are involved, I recommend choosing the one who is old enough to realize what is going on or the child who will be the pickiest. Find or make a costume that meets one or more of the following criteria: is absolutely adorable (which is tough not to find since all baby costumes are absolutely adorable), is meaningful to you or your family.

Case in point: For our daughter’s first Halloween, she was a watermelon because I craved and ate watermelon every single day of my pregnancy.

Once her outfit was chosen, we decided to be farmers, since we grew her. Not the most original idea in the world, but she was beyond precious, and it was meaningful to us.

Trick or treating is hard work for little folks. We made the decision early on to use a hand-me-down wagon as part of the costume, and it has been a staple of our Halloweens ever since. It’s practical, and it allows for some serious costume embellishments. The creation of Amelia Earhart’s plane was incredibly labor intensive and involved my husband spending many a night in the garage until well past midnight. I think it was worth every single second!

In fact, it has often become the star of the show in our family’s Halloween endeavors and both a labor of love and source of great frustration for my husband. You would not believe the amount of attention this attracted in our neighborhood. Political preference aside, our first female President and her motorcade were the hit of the town.

The wagon construction typically begins in early October and involves many late nights, some profanity, and a serious duct tape bill.

Think outside of the box. Our little President was on a mission to get some candy.

When choosing a theme, the sky is the limit. Draw your inspiration from politics, popular culture, literature, or get more abstract.

For our daughter’s second Halloween, when we were still just a family of three, we started with the idea to make her the first female president.

The wagon became the presidential limousine, and my husband and I were the secret service. Not only was the costume a wild success, but we had neighbors coming up to us for years asking, “Wasn’t she the president for Halloween?”

This past Halloween, we decided on a nautical theme after my daughter insisted that she wanted to be a mermaid.

Our wagon became the S.S. Bohrer, my son was an adorable octopus, naturally I was the ship captain, and my husband became the Pacific garbage patch (way outside of the box, required a lot of explanation, but was completely worth it).

Play to your numbers. Are you a family of four? The possibilities are endless — the Beatles, the Ninja Turtles, the four seasons… Do you have more children? Don’t fret. You can be a box of crayons, a sports team, tools in a tool box. Still just a pair, but love the idea, or do you have a family member who refuses to participate? Ketchup and mustard. Peanut butter and jelly. If you are stumped for an idea, figuring out how many people are involved is a great starting point. Family of three? Okay, the President and her two most trusted secret service advisors. 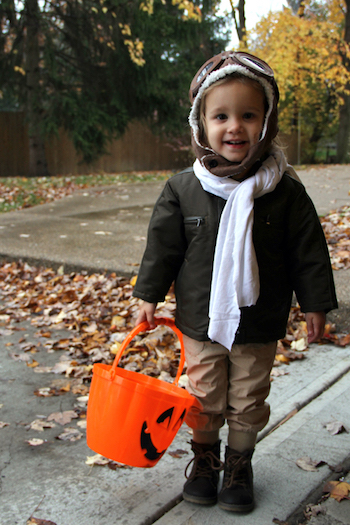 This entire costume cost about $15. We ordered the goggles and cap from Amazon, but the rest of the items were purchased at Once Upon a Child, and are currently being worn by our son.

Just to be perfectly transparent, we do purchase some elements of our costumes, supplies, and occasionally purchase a complete costume. But it has become a family challenge to repurpose items around our house and to make more than we buy.

First, we just don’t have the funds to go crazy on Halloween. Second, both products of families who valued frugality, it’s in our blood. My husband and I were raised by families who scoffed at store bought costumes, and we like to model this resourcefulness for our children.

I feel sure there will be a time in our family when our children simply refuse to participate in this beloved tradition, but we are actively and sometimes passive aggressively resisting that day.

We know our days numbered, so we are enjoying them immensely.

Curious about our plans for this year? Well, you will just have to wait until the big reveal, but here’s a clue:

We are embracing our new numbers and will be trick or treating as an iconic family of five. Busy is a way of life for Megan Bohrer, a working mother of two kids with a surprise baby on the way. A recent transplant to the Midwest, Megan and her young family are enjoying discovering everything the Circle City has to offer.

As a social worker by day, Megan actively builds community relationships and helps families in need with her work for the Children’s Bureau. Megan also works as the Editorial Director for theCityMoms, the premier social events and support community for Indy moms. When her kids are in bed, Megan also writes for theCityMoms, Indy’s Child magazine, and works on the next great American novel, one chapter at a time. Indoor Trick or Treat Alternatives for Halloween in Cincinnati Stay dry at these local trick or treat events! Halloween Candy Buyback Programs in Cincinnati Get cash for candy!