Home > Guide > 15 Unique Landmarks You Can Only Find in Ohio Ohio is full of one-of-a-kind attractions!

15 Unique Landmarks You Can Only Find in Ohio Ohio is full of one-of-a-kind attractions! Summer break’s fast approaching, and we’re on the hunt for fun day trips we can take with your kids.

Did you know Ohio has the world’s largest basket? Larger-than-life mining bucket? A Triceracopter?

Ohio is full of one-of-a-kind attractions; and this summer, we challenge you to visit them all! Here are 15 unique landmarks you can only find in Ohio:

Jersey the Cow gives everyone a warm welcome at this family-run farm in Yellow Springs. The Young Family built the now-iconic red barn in 1869, and the 60-acre farm has grown into a special place for families to visit year-round. As a real, working farm, Young’s raises Jersey cows, which are known for producing the creamiest milk. The farm is perhaps best-known for the large, golden jersey dairy cow (named “Jersey Girl”) on its sign. Jersey Girl has been welcoming visitors for 40+ years; in 2016, Jersey Girl was blown from her perch during a heavy wind storm and the whole event caused quite a stir with fans. Cincinnati
Created in 1977 by artist Patricia A. Renick, the Triceracopter is a 30-foot sculpture that’s half triceratops, half helicopter. The sculpture is located on the 4th floor of the University of Cincinnati’s Langsam Library. 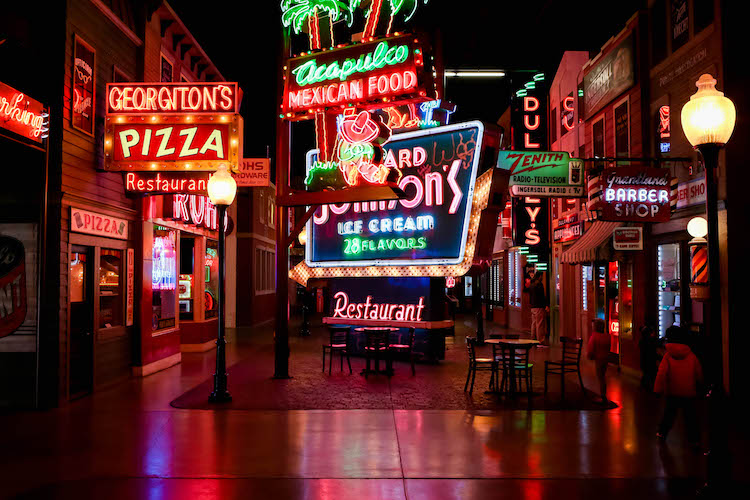 Cincinnati
The American Sign Museum celebrates the art (and artistry) that went into the bright, eye-catching signs in the first half of the 20th century. There are elegant glass signs from the early 1900s, “pre-neon” signs from the teens and ’20s and bright neon numbers from the ’30s, ’40s and ’50s. The signs blink, flash and spin — they’re larger than life, three-dimensional works of art from a bygone era. This summer, visit the Sign Museum for FREE with your Library Discovery Pass! Loveland
Located on the banks of the Little Miami in Loveland, Cincinnati’s Loveland Castle (“Chateau Laroche”) is a true testament to the power of imagination. This authentic, full-scale castle was built brick by brick by Cincinnati native (Sir) Harry Andrews. The castle includes gardens, several towers, a dungeon and rooms full of medieval replicas and memorabilia. Hillsboro
Put this one down as one of Ohio’s more bizarre attractions: a 28 foot wide and 68 foot long horseshoe cran known as “Crabby.” Hamilton
Pyramid Hill is an outdoor museum comprised of monumental pieces of sculpture in an environment of meadows, forests and gardens. Kids will be in awe of all the larger-than-life statues! Peebles
Serpent Mound is a 1,348-foot-long, three-foot-high prehistoric effigy. Radiocarbon analysis estimates the date of construction at approximately 321 BCE, one year after the death of Aristotle in Greece. West Liberty
The Ohio Caverns is a great day adventure and easily located on State Route 245 in West Liberty — about an hour and a half drive northwest from Cincinnati. During the summer season, two tours are offered: The Historic Tour and The Natural Wonders Tour (combined 2-hour tour for a discounted price). These colorful caverns are a hidden surprise beneath acres of Ohio farmland. Dayton
Housed at the Carillon Historical Park, the Wright Flyer III is the world’s first practical airplane and the only plane designated a National Historic Landmark. (In fact, Carillon Historical Park has more Wright Brothers artifacts on display than in any other place in the world!) There are lots of interactive parts to this exhibit, including a wind-up plane crank and mini theater showing old videos of the Wright Brothers. Bellaire
Are your kids LEGO obsessed? Then Bellaire’s Toy And Plastic Brick Museum is a no brainer! The museum is recognized as the only LEGO-based museum in the world, and features vintage collections, life-size creations, themed displays and more! McConnelsville
Are your kids into big trucks? Think of Big Muskie’s Busket as the ultimate Touch a Truck! “Big Muskie” was once the “World’s Largest Earth Moving Machine”; today, what remains is a larger-than-life bucket perched atop a hillside in Western Ohio. Mansfield
Made in Mansfield, Ohio, Elecktro was a 7-foot-tall, 260-pound robot who became one of the most popular attractions at the 1939-40 World’s Fair in New York City. If your kid’s into robotics, this is a must-see. He’s now housed at the Mansfield Museum. Ashville
Located at Ohio’s Small Town Museum, this traffic light put Ashville on the map! It is the first motorized signal light, and Ashville holds Theodore Boor’s invention as the “most unique traffic signal ever invented.” The city is very proud of its contribution to transportation history, and the light is definitely worth seeing. Cleveland
Fans of this holiday classic have to visit Ralphie’s house in Cleveland. The house is open year-round and is exactly as seen in the film. Directly across the street from the house is the official A Christmas Story House Museum, which features original props, costumes and memorabilia from the film, as well as hundreds of rare behind-the-scenes photos. How about celebrating Christmas in July in Cleveland? Cleveland
Commissioned by Sohio to be placed at their headquarters on Cleveland’s Public Square, the Free Stamp was designed by Claes Oldenburg and Coosje van Bruggen in 1985. The 75,000 pound aluminum and steel replica of a hand stamp was designed to stand upright with the word “FREE” facing the ground. However, the piece was reoriented to lay on its side — rumor has it the stamp was angled to have the “FREE” stamp pointing towards the corporate offices on the 23rd floor of the BP building.

This summer, explore all the unique beauty of the Buckeye State by visiting these 15 unique Ohio landmarks! Guide to Spring Consignment Sales in Cincinnati Save money this spring! Family Friendly Ways to Celebrate Valentine’s Day in Cincinnati Share the love with your family this February!